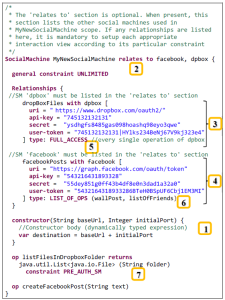 The paper “A New Architecture Description Language for Social Machines”, by Leandro Nascimento, Vanilson Burégio, Vinícius Garcia and Silvio Meira, has been accepted for publication in the Proceedings of the 23rd International Conference on World Wide Web Companion, WWW ’14 Companion.  This work is part of the Leandro’s PhD and is going to be presented during the “The 2nd International Workshop on the Theory and Practice of Social Machines” (socm2014), a workshop at the www2014.

The term ‘Social Machine’ (SM) has been commonly used as a synonym for what is known as the programmable web or web 3.0. Some definitions of a Social Machine have already been provided and they basically support the notion of relationships between distributed entities. The type of relationship molds which services would be provided or required by each machine, and under certain complex constraints. In order to deal with the complexity of this emerging web, we present a language that can describe networks of Social Machines, named SMADL – the Social Machine Architecture Description Language. In few words, SMADL is as a relationship-driven language which can be used to describe the interactions between any number of machines in a multitude of ways, as a means to represent real machines interacting in the real web, such as, Twitter running on top of Amazon AWS or mashups built upon Google Maps, and obviously, as a means to represent interactions with other social machines too.

This entry was posted in Social Machines, Uncategorized. Bookmark the permalink.